This first update might have you advertisers in a state of ecstasy, but you’ll still have to wait until it’s available in your ad accounts. The second update has been rolled out for all advertisers globally and will help you get a quick glimpse of multiple accounts in your Manager account.

Gallery Ads, first announced during Google Marketing Live 2019, are now being rolled out to advertisers in beta.

Gallery Ads are swipeable, image-based ad units that appear at the top of search results. 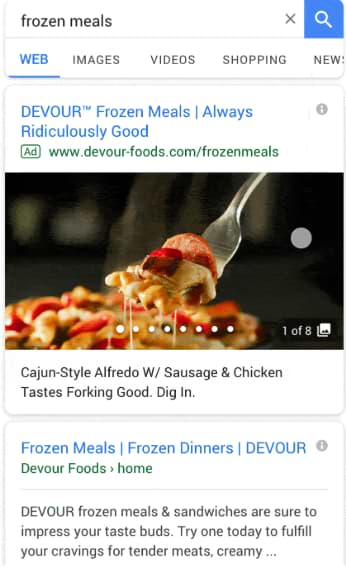 Yes, you heard that right! You will now be able to include images in your Search Ads.

These ads are designed to help advertisers showcase their brand in a more visual way on the search results page.

You can include up to 8 images. Plus, you can include a unique caption and call-to-action button at the end of the gallery for each image.

Visualize and navigate between multiple accounts

If you are managing multiple Ad accounts in your manager account, Google has launched a new tool that will help you visualize and navigate through these accounts much more easily than before.

The new tool will show a map of all the accounts and sub-accounts under your Manager account, along with performance metrics such as clicks, impressions, cost and conversions for each account.

You will also get a glimpse of owned and shared labels, conversion tracking parents, remarketing pools and external managers that have access to the accounts.

You can find this new Account Map under the Tools section of your Google Ads interface.

Evergreen Googlebot is finally out

Moving on from updates for advertisers and diving into the realm of the SEOs.

Three months after the launch of evergreen Googlebot, Google has now updated their testing tools within Google Search Console to use this new evergreen Chromium renderer for crawling.

That means what you see in Chrome, what Googlebot sees and what Google shows you in its testing tools, should all match up.

But I still see the old useragent

No need to panic! Google hasn’t actually changed the user agent yet in order to avoid any issues for those who have hardcoded specific commands for Googlebot based on that useragent.

There will be an update on that soon, but for now, Googlebot’s user agent and the user agent used in the testing tools haven’t changed.

Well, for the past three months, the testing tools have been using the old version of Googlebot. The result was that it wasn’t showing you exactly what the new Googlebot was actually seeing.

Now, they all match up, so you can actually rely on these tools for your SEO tests and validations.

🔊 PI LIVE is one of the world’s biggest performance marketing conferences and The WTAFF Crew is going!

The world-tour of conferences is not over for The Crew!

Our next stop is going to be… London! On 22-23 October 2019, the PI LIVE conference is taking place. With over 3k attendees from 60+ countries, including brands with huge budgets like Amazon, Apple, AWIN, Google, AMEX, Uber, Rakuten and more, this is going to be one of the biggest performance marketing focused conferences…

Curious what sort of marketers attend this event? Well, check out the numbers and demographics from 2018! As you can see, it’s all sides of the industry and a big list of who’s who of big brands.

Just some of the reasons we think this promises to be a killer event:

Whether you’re an affiliate, a media buyer, an ad network, an affiliate network, ad tech solution, etc., PI LIVE is an awesome place to build exciting new partnerships with global brands. And you can meet some of The WTAFF Crew that’s heading there!

We have one last bit of good news for you! Early-Bird pricing is still here but ending in under 48 hours so save £250 on each ticket because this is their lowest price from now on! You won’t regret it!

PS: Want to exhibit at PI LIVE? Head over here.

Millions of users’ locations and stories sucked up

Facebook’s flaws in data management continue after Hyp3r, an advertising ally of the social network, scraped a vast amount of users’ data. The data collected includes Bio, location and Stories.

This all happened right under Instagram’s nose.

How could this happen? In all likelihood, it’s probably down to a combination of configuration errors and lax oversight by Instagram.

Hyp3r specialized in targeting users that were attending specific events, such as a baseball game or concert. The agency then used Instagram’s official API to hoover up data, just like the kind of data gathering that’s been going on for years thanks to companies such as Cambridge Analytica… You can draw your own conclusions from that.

However, when the API was severely restricted in early 2018, Hyp3r’s access to this data became more limited. And what do you do to survive? Adapt, right?

Well, Hyp3r apparently didn’t like that saying. So, instead of adapting the business, they just sneaked around the new barriers and continued scraping data from Instagram.

But the game didn’t last long.

Obviously, Facebook responded to the data-scraping by restricting the company. In addition, they said that they’re making changes to prevent similar issues arising in the future.

This issue highlights the fact that FB is still lax with data management. Come on, Hyp3r was an official ally. They really should know what their partners’ are up to…

As TechCrunch states: If these partners receive even cursory reviews of their products and methods, wouldn’t it have been obvious to any informed auditors that there was no legitimate source for the location and other data that Hyp3r was collecting?

What are the strongest elements of a high-quality conversion page?

According to Unbounce, you need a contextual hero shot, a single and focused call to action, a clear statement of your value proposition, compelling benefits and testimonials to spike up social proof.

However, starting from 0 is always hard. So, to help you out there, we’re bringing you this post from Unbounce to put you on the right track for building a killer conversion page.

15 high performing landing pages. Different niches and different conversion rates, some even going up as high as 62%!

Time to hit these peaks!

A solution for the lead gen problem brought up by Big Bang Ads. Tip for Australian advertisers

A while ago, Big Bang Ads reported on a problem that’s hurting affiliate networks in the lead generation niche. Some of our readers proffered a solution. Plus, tax tips for Aussie advertisers.

So what can we do about FB and lead-gen?

Remember the lead-gen challenges we brought up on 2nd August 2019?

OK, here’s a reminder: Our friends from Big Bang Ads mentioned that the lead acceptance rate from social traffic, especially FB, has gone down. So, BBA’s clients don’t accept the leads even though BBA pays its affiliate for them.

The cause of this problem? Facebook was sending the same people to all affiliates running affiliate lead-gen offers.

We offered a few solutions, but aside from the ones we mentioned, Jared Laidlaw got in touch to share this strategy:

Instead of targeting lookalikes of existing leads, how about excluding those lookalikes and targeting outside of this?

The reasoning for this is that if everyone has a very similar seed for their lookalike audience, the target ends up being the same group of people.

That’s just another idea. Have more suggestions? Let us know at [email protected]!

This is mainly for Australian advertisers. Tim Maggs found a solution to help you avoid paying GST (Goods and services tax) on your ad spend.

How? Simple! Just add your ABN (Australian Business Number) to Facebook, and it will stop charging the GST on your spend.

Getting to know each other better and a special announcement!

If you haven’t done so already, we wanna ask you to fill in a quick-2-minute survey that helps us better curate and write this daily content for your reading pleasure.

Oh, and before we forget…

Every weekend, we run checks to see if some people haven’t opened any of our emails lately. If we find that you haven’t, then we let you know that we plan to stop sending you our newsletter.

Why do we do this?

Because the people who want to get this email might not get it if we send it out to too many inactive contacts.

So, if you did not open any of our emails in the past month, you’ll get a notification email letting you know about it and what to do if you want to stay subscribed. If not, we’ll just stop sending emails to you.

Human creativity has no limits, and it fails to surprise us.

The most recent surprise comes from a 22-year-old Spanish hustler that came up with an innovative business model. You can start this business in under 5 minutes!

But also, illegal! In fact, he got arrested for this. So, it was a joke, do not try this at home.

But do you want to hear a joke that is truly funny?

He appeared in court over the weekend and was granted bail to the tune of $3.3k. Well, actually this isn’t a joke…

Just $3.3k for the biggest Amazon scam ever recorded in Europe. 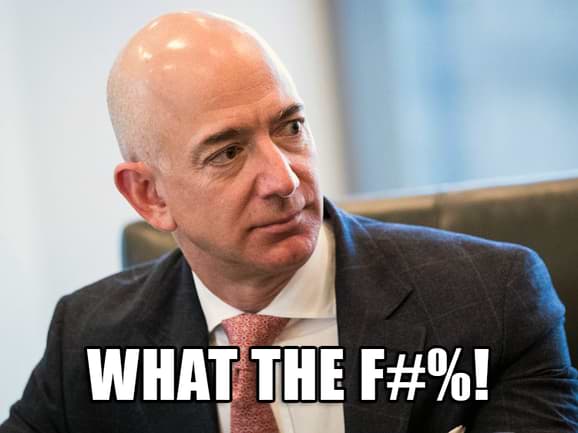