450k Dropshippers on Shopify are its biggest threat: SeekingAlpha uncovers the weakness. Full stack marketer Servando Silva: From SEO to Pops to FB Ads to Push and back to SEO. FB now tells you when to post for maximum engagement.

Someone made $40B this Q3 and it’s none other than Google’s parent company – Alphabet. Imagine Google sharing their ROAS screenshots in all those FB groups.

Click volumes have increased by 18% Y-Y but that’s just 1% increase from Q2’2019. Click growth has been slow in all quarters of this year. However, as per the company, the major reason for that is stricter rules on the videos that can carry ads, put forth in January 2018.

BERT is not being used for ads, yet.

All is going well for Google but the regulatory clouds from both sides of the Atlantic are looming over it, including antitrust and data privacy investigations.

Why your CPA is gettin’ worse and worse 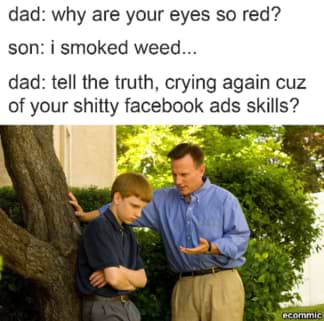 The “My campaigns are sinking” has been a popular topic lately. Or at least that’s what we’ve observed as a trend in many FB groups. And it all escalated right after “I got banned for no reason”.

Trying to address the first problem (performance drops), Andrew Foxwell shared his take and how you can address it.

he cause: Since the hot season is just ahead, a lot of ad space has been reserved in the Reach/Frequency buys from big brands, locking in CPMs for October. Basically, there’s less ad space available for the small fish.

Okay, prices go up during Q4, it’s nothing new. But Andrew’s point here is about Facebook reserving ad space for big brands.

That is all. Nothing that stands out. Just a reminder and a sprinkle of common sense.

Have a killer Q4!

There aren’t many people that have done as much as Servando in so little time. Sure, some might brag about their achievements, but when it comes to actually creating profitable campaigns and businesses, Servando is the real deal.

Which is why this is a must-watch or must-listen-to discussion.

We talk to Servando about:

There’s also a short guest appearance by one of Servando’s cute cats… We heard the Internet likes cats so we just had to mention it!

Do you prefer Spotify? Got you!

It’s quoted at 20x the EV/Sales (Enterprise value-to-sales). To give you a clearer picture, Alibaba is at 6.2x, Amazon is at 3.2x.

However, not all that glitters is gold. In fact, there is something that scares investors.

And that something is… *drum roll*… dropshippers!

While on one side Shopify is building long term projects such as the $450M robotic warehouse, a big share of its customer base is unlikely to last in the long-term, especially during an economic downturn.

That’s why dropshippers are a potential problem for Shopify.

Let’s check Seeking Alpha’s article that went deeper into this:

“These are merchants (dropshippers) who simply resell products from other merchants. Usually, these merchants sell their products at an extreme mark-up. And almost without exception, these merchants are primarily selling low-quality, low-utility goods.”

Nothing new for us, right? From an investors perspective, it can be an issue though…

A somewhat old article by Citron Research stated that out of the 500k stores running on Shopify, only 50k were valuable businesses. Still worse, venture capitalists argued that only 40k of these could be considered as an addressable market.

In other words, investors are worried that you can’t build a business on all these wannabe entrepreneurs hoping for the breakthrough. 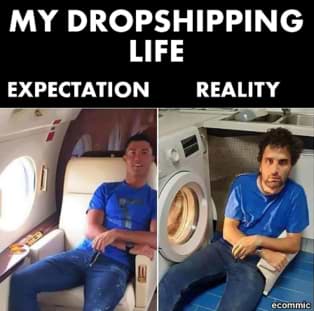 And according to Seeking Alpha, there’s something worse. The problem is that Shopify is fuelling the fire by supporting YouTube channels that preach the dropshipping religion without showing a sustainable model.

We’re not saying dropshipping is all bad. It does have its weaknesses which is what scares investors. It is possible to make it work, both for the store owner and for Shopify… But if the success rate goes to half, what happens to Shopify’s revenues?

All newbies represent a big share of Shopify’s customer base. And it’s not good for investors because it does not represent a sustainable cash flow. Unless, they can increase their likelihood of success…

In other words, there will always be a churn but there’s a real risk no new people come in at some point, which will heavily hurt Shopify’s business.

You live in a one storey house made entirely of redwood. What colour would the stairs be?

Yo, ad buyers and SEOs! You might be good at your game but this guy is literally sick and tired of you guys.

What’s his complaint? Well, Elon is unable to drive site visitors to his solar roofing company because there are too many websites ranking above him in SERPs. And those which are not ranking high are using paid ad campaigns.

His products are nowhere visible to his target audience 🙁 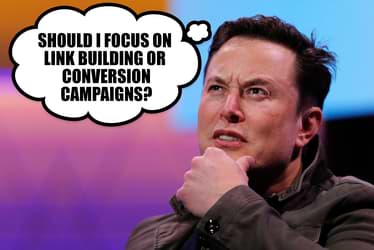 It is just too hard for his customers to Google and find his products.

Suddenly, a bunch of SEOs on Twitter started responding to Musk’s tweet – some offering SEO advice, some subtly hoping to bag his SEO work, while others simply resorted to standard FB Groups strategy “Hey Musk, DM me. I can help you with that”. Lololol!

Elon, aka “Treelon”, Musk got a lot of free SEO advice

Treelon, if you are reading this, hit up The Crew! There are over 8k marketers reading this newsletter… You can probably find your dream SEO person here.

What stairs? You live in a one storey house.