An artist fools Google Maps to create a traffic jam in front of Google’s office. 8 actions that provoke the FB regulation team to smash your ad accounts. Dim Niko shared the right way to calculate the Customer Lifetime Value of your biz

This is the Q4 2019 Reports’ week, and today it’s the turn of Alphabet Inc., Google’s parent company Let’s dive straight into some stats.

Delving deeper into their ad business, this is the first time that Google broke out YouTube ad revenue, which brought in $15B in 2019.

Another strong voice is represented by Google Cloud business, which brought in $10B over 2019. A business of itself, uh?

Despite the staggering numbers, these results left the market somewhat disappointed. Shares went down by 3% as Google missed its revenue target, and the CEO reacted like this:

“Our investments in deep computer science, including artificial intelligence, ambient computing and cloud computing, provide a strong base for continued growth and new growth chances across the Alphabet”.

Vulnerabilities, bugs and other updates for webmasters and SEOs

Say hello to Sajio George, the man who shared a bunch of updates for SEOs and webmasters in the SEO Signals Lab Group.

But before you do that, let’s extract some juice from the post, shall we?

+ The first update comes from Google’s webmaster central hangout from January, 31st. In this hour-long video, John Mueller talks about how DMCA complaints are taken into account algorithmically for ranking purposes.

+ Moving on, Google Analytics has now extended data retention for up to 14 months for user-level and event-level data. This means your event-level data will not expire after the previous two months period, allowing you to conduct longer term analysis of your data.

What can you do with this data?

+ If you are using the newly launched web-conversion export from App + Web properties, be informed that all conversions exported to Google Ads (except for remarketing) will now be enabled for bidding by default.

If you have previously exported conversions, they will be editable in Google Ads so you can manually enable them for bidding.

+ Meanwhile, Google’s webmaster team also confirmed a bug in GTM verification method in Search Console yesterday. Though the bug has been fixed, you might want to check your properties and re-verify them if necessary.

+ And finally, if you are using WordPress and its popular Strong Testimonials plugin, beware of these recently discovered XSS vulnerabilities and make sure to update the plugin immediately.

All WordPress websites using Strong Testimonials version 2.40.0 and below have been affected. 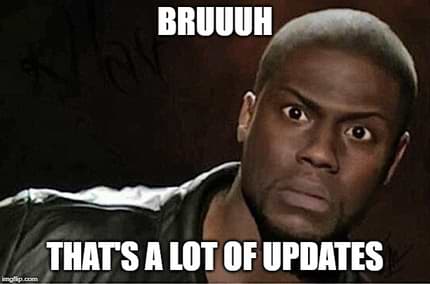 That sounds like a lot of work to do for the next few days, good luck!

💁‍♂️ Ever wished you could buy all your native ads from one fully-integrated and feature-rich place? Check this out!

Have you ever considered using Voluum DSP? Are you already a Voluum DSP user? Whatever your answer is, we have some great news for you.

The team at Voluum DSP has been carefully listening to what YOU have to say and will try to answer your needs in the best possible manner so that you can succeed in mastering native ads and start generating stable ROI.

Justyna (Account Manager) and Wojtek (Ad Ops Expert) from Voluum DSP are doing a live webinar followed by a Live Q&A session about leveling up as a Native Media Buyer.

They will show you exactly how to become a native ads ninja and avoid rookie mistakes when running ads on their platform.

PS: Each and every stage does affect the ROI-positivity of a native campaign, hence it’s important to take your time when preparing your digital campaigns.

And you won’t come back empty handed. You will also receive:

Register for the webinar here and go live with the community of fellow Native Media Buyers here.

If you advertise on Facebook, chances are that you’ve had at least one nightmare about Facebook banning your Business Manager.

Now, trying to keep those bad dreams away from you, Lourenço Maciel shared what are, according to his experience, the practices that cause bans for circumvention.

Let’s go into them.

High certainty of getting hammered:

Medium certainty of getting hammered:

Low certainty of getting hammered:

Despite the fact that there’s nothing absolute when it comes to Facebook restrictions… These look like some useful suggestions to keep in mind!

What weighs more? A pound of feathers or a pound of stones?

Can tech ever be foolproof? What if it’s Google’s tech? Well, the common answer to both these questions is, quite obviously, NO…

What happened? An artist named Simon Weckert was able to trick Google Maps to create virtual traffic jams on the streets of Berlin.

How did he manage? Weckert loaded 99 smartphones running Google Maps into a cart. He then had someone wheel that cart around various streets in Berlin, just outside Google’s office.

This was enough to fool Google’s tech into thinking that there was a huge traffic jam on those streets. Also, because the phones were placed in a cart, it tricked Google Maps into believing that the traffic was slow-moving. 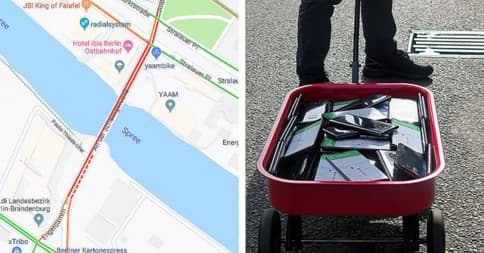 Google’s response? “Whether via car or cart or camel, we love seeing creative uses of Google Maps as it helps us make maps work better over time.”

While some users found it funny, there were some who raised their concerns and thought this could turn dangerous or problematic.

What do you guys think?