Just as we promised, we’re going to talk a lot about e-commerce and Shopping Ads during Q4 this year, and hopefully it will help you make the most of the holiday season.

Yesterday, we talked about the enforcement updates for Shopping Ads on Google that will boost the visibility of your ads when compared to your competitors.

Today, we’re bringing you the industry’s best kept secret surrounding Shopping Ads. This info is rarely found in any of the FB Groups, simply because very few people know about it. If you already do, kudos to you, give yourself a pat on the back.

For the rest of you, let’s indulge in some awesomeness called Comparison Shopping Services (CSS).

+ What’s CSS? CSS are platforms that can bid to place Shopping Ads on Google’s general search results pages on behalf of you. So, Google Ads manager isn’t the only platform to run Shopping Ads. In fact, Google Shopping itself is a CSS platform.

+ What does this mean? It means that, as a merchant, you can provide your product data to any CSS platform out there and let them run these ads on your behalf. You can also use multiple CSSs at the same time. The more, the merrier.

+ How does this work? The CSS creates a separate Merchant Center account for you which allows them to upload inventory and run Shopping Campaigns.

+ How is this helpful? To put it simply, it saves you a lot of money (especially if you are running bigger budgets) by significantly reducing your bids. This means that you part with less cash for each click. Jackpot, huh?

+ Woah, how? As an advertiser, you will never be second-priced against yourself in the auction for any offer. This rule applies irrespective of the number of CSS platforms you use.

+ Who are they available for? CSS are available to merchants in countries that are part of the European Economic Area (EEA) and Switzerland.

One of our readers, Jon Lord from Connexity, recently spoke at PI LIVE about the topic and refers to CSS as the industry’s best kept secret.

“When asking how many people are using multiple CSS already, only 2 out of a few hundred people raised their hand. It’s one reason I described it as one of the best kept secrets in performance marketing”.

Jon also added that measurement is key. “Test it for yourself and ask for a Google Auction Insight report from your CSS. Check the overlap, outrank and impression data against your own direct campaign as well as the effect it’s having on your competitors bidding on the same products.”

Are you ready for the ecomm Superbowl?

When we featured BFCM post number 8178 a month ago, we hoped it would be the last one. Well, sorry to say that it wasn’t! After all, as Scott Seward says, the holiday season is the e-commerce Superbowl! Or the Champions League final match if you’re more about soccer.

Anyway, the point is, the more you know, the better.

So, let’s see these new tips that Scott Seward shared with us:

+Campaigns: This is what worked for Scott Seward last year.

A lot of things going on, uh? Well, Scott actually went on to talk about attribution during the Q4 and how to leverage chatbots for spike up that juicy ROAS.

Have you ever heard about Agora? No? Officially, it’s a publishing company. In practice, it’s a direct response business that leverages newsletters, publications and other content to push their products.

If you’re in the direct response copywriting world, you might know of them. It’s one of the most coveted companies to work for as a copywriter… because they usually only hire the best for their marketing camps.

Nothing bad so far, except that the FTC sued Agora for tricking seniors into buying books, newsletters, and other publications that falsely promise cures for widespread diseases. They are even accused of promoting a false plan that helps these seniors to cash in on a govt-affiliated check program.

The two products involved are:

Well, the FTC is increasing its effort and really making a statement by investigating such a well respected company.

It seems that the FTC is starting to penalize not only what is promoted, but also how it’s promoted. It’s becoming a bit like Facebook, punishing companies that used aggressive marketing practices get sales.

What can point in every direction but can’t reach the destination by itself.

The classic tale of turning a pain point into business idea

There are many business ideas out there waiting for you to grab their attention. The question is, how big is your appetite and how good is your business acumen?

Jayson Gonzalez, a college student from Minnesota, came up with a not-so-innovative but great idea when he realised that there hadn’t been a Krispy Kreme store in his area for 11 years!

That was his Aha! moment. 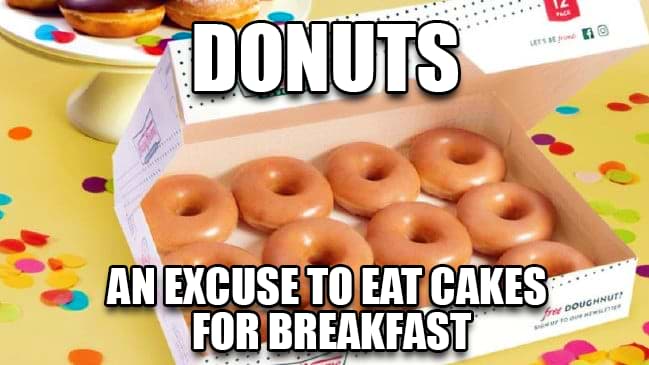 Doughnut arbitrage could have landed him a Forbes magazine cover.

So he decided to drive all the way to Iowa (270 miles away) every weekend to buy hundreds of Krispy Kreme doughnuts. What next? Obviously he sold them to his own customers in the Twin Cities area.

Unfortunately for him, a local publication featured his story and he was asked to stop by the doughnut company due to his sales creating a liability for the North Carolina-based company.

“Life happens, and it could be a sign that something else is meant to be.” – Gonzalez

PS: Writing this post, we found out there’s been an update to the story: Krispy Kreme saw this guy as an chance to branch out into a new state. They struck a deal with him and he’s now allowed to resell Krispy Kreme doughnuts as an independent operator!

Well, we can now say that doughnut arbitrage is actually a real business. The hustle paid off for Jayson.