Blue giant is starting to get exhausted: Q4 2019 earnings report

It’s that time of the quarter again. Facebook released its Q4 2019 report and Mark Zuckerberg turned to the social network to share some of his thoughts about Facebook.

Starting with the report:

Alright, Facebook did smash expectations yet again, especially when it comes to revenue. However, the rising costs are kinda worrying for Wall Street. In any case, on the advertising side of things competition is still going up and up, which we can see by the Ad revenue growth.

User growth is slowing down, but Facebook said this was expected due to the platform becoming more and more mature.

What was Mark Zuckerberg’s POV?

Well, more or less the same stuff as he shared a while ago in his last post.

The growth of ad revenues and users is slowing down, although this moment was always expected to come. It can’t just keep growing at crazy rates forever because, well, there aren’t any other users outside humans :). Kind of the same thoughts as our last post: Growth is slowing down but Facebook isn’t going everywhere.

Forbes hit hard by… something 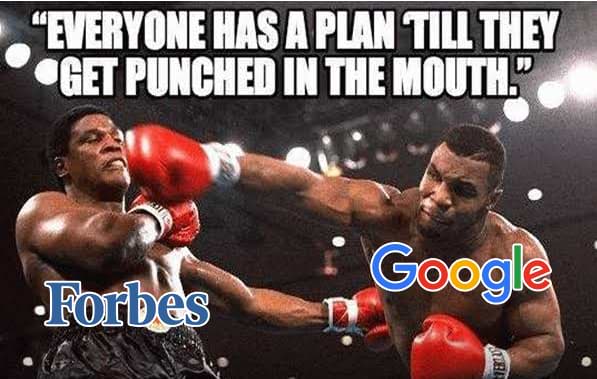 “My traffic that is down circa 10x and that’s being corroborated by fellow writers I know well.”

Yeah, that apparently comes from a senior writer at Forbes.

What happened? After Google’s broad core algo update, which was released around January 13, the traffic for Forbes started tanking.

This is a massive and concerning drop in traffic from Google Search. We’re talking “down circa 10x” starting January 27th at 11 PM ET.

In fact, some of the usually popular articles aren’t even reaching 100 views per day right now.

From the looks of things, the January 2020 core algo update and the Featured Snippet de-duplication change seem to have heavily penalised Forbes. Or maybe, there was another algorithmic update from Google that has caused this drop for Forbes and a few other sites.

The writer at Forbes shared some traffic charts showing the dip in traffic that started at 11 PM ET on 27th January, but that has since been deleted from the Twitter thread due to privacy reasons. But, you can join the discussion here.

Zoom Out: It is hard to pinpoint what is really going on with this. With all the changes happening on Google’s end, between the core update on the 13th January, Featured Snippet change on the 22nd and Favicon testing on the 27th, something has hit Forbes hard.

Maybe it has some connection to the clickbaity headlines Forbes uses? We don’t know for sure. Have any of you seen a sudden spike or a drop in traffic anytime this month?

Kings of Advidi… It’s back for the 4th year! The 2 month affiliate contest gives 7 outstanding affiliates an unforgettable trip to Amsterdam for King’s Day, when that special city is at its most vibrant.

Here’s just a taste of what the crowned kings and queens will get:

Who can claim the crown? There are 7 categories and each will only have one king or queen.

For every $1k you generate with Advidi, you will get one point… But there’s more! Special Crown Gems can help you gain an edge and get one step closer to the crown by multiplying points or giving you a bonus. The leaderboard will be updated twice a week too! Sounds interesting?

Check out the full set of rules right here.

When does it start you ask? 1st February until 1st April and it’s open for all Advidi affiliates. The kings and queens will be visiting Amsterdam from 25th to 28th April. This can be your trip of a lifetime…

Sign up to fight for your crown right here.

Kevin Pierce shared how he achieved these results, but first, let’s see some background info:

It’s a high-ticket store with a solid brand and customer service. The AOV is around $100-150.

DPA Retargeting: DPA campaigns are powerful, and this is how Kevin set them up:

One campaign, with 10 ad sets targeting the following audiences:

Each one of them is on a 180-days basis. Although, if the size is too large, he breaks them down like in the DPA campaign.

Talking about creatives, it’s better to use different formats than the ones used for cold campaigns. His tip is to create GIFs because they catch attention and it’s easy to create a lot of variations, providing fresh content for users constantly.

What am I talking about here?

Corona is relishing the new Coronavirus… in Search

No, no, no. Corona beer has got nothing to do with the deadly outbreak that originated in Wuhan, China. But some people seem to think it does…

Alright, we don’t want to make funny jokes about this terrible crisis, but ever since the outbreak searches for “corona beer virus”, “beer virus” and “beer coronavirus” have increased substantially worldwide. 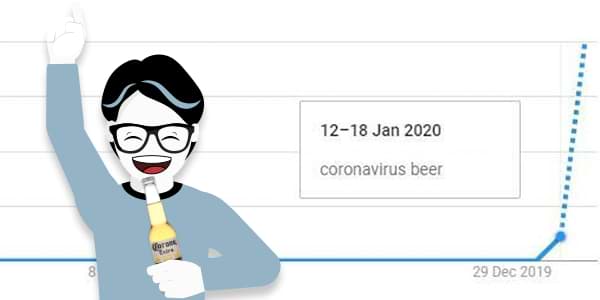 What is really going on with the Mexican beer and the virus? Well, of course, there is absolutely no connection between the two.

It’s just that the name coronavirus comes from the crown-like spikes that can be seen protruding from the virus under a microscope. In Spanish, corona means crown.

Fortunately for Corona (the beer), the stock price of parent company Constellation Brands has held steady.

Well, you never know. Next thing you might hear on the Internet is that Corona beer is the cure for the virus. It’s a weird world we live in.