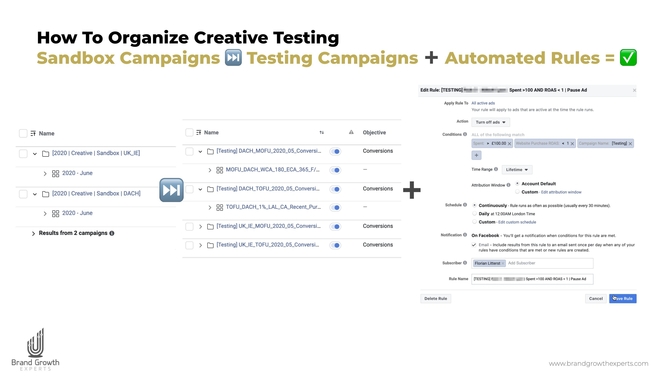 You will either consider this super basic (if you already have the ultimate structure in place) or this could be the long-awaited answer to managing a mountain of creatives.

Florian Litterst shared his sandbox approach for creative testing on Facebook, or any other platform for that matter. How does that sound?

As is the case with most structures, this only works if you follow it every single time. If you start skipping steps, you’re on a fast-track back to messy campaigns.

May beats all expectations for retailers

Adobe’s latest Digital Economy Index report is out and it’s about as encouraging and motivating as you could hope for.

As per the report, online shopping in May 2020 has exceeded the 2019 holiday season by 7%. There was also a whopping $52B increase compared to the same period last year.

The current value of e-commerce in the US is around 12-16% of overall retail spending, and this could quite possibly reach 20% or more. This would have taken years under normal circumstances.

Up to $1M in lines of credit has been announced for its SMB sellers by Amazon through a new, but as yet unannounced, partnership with Goldman Sachs.

As we reported yesterday, Walmart has already announced a partnership with Shopify to provide SMB sellers access to Walmart’s 120M monthly visitors via their marketplace. It’s expected to add 12k Shopify sellers this year.

Buy-Online-Pick-Up-In-Store (BOPIS) is slightly down from its peak of 200% in April and the report claims it has begun to plateau.

As stores begin to reopen, people are still placing orders online and picking up from the store.

Businesses able to better integrate online and offline data with customer experiences will be in a stronger position than their pure-play competitors.

Sales coming in via smartphones also increased by 40% in May. In fact, customers who are shopping online for the first time tend to be utilizing their smartphones for this.

Looking for a powerful auto insurance offer that converts?

Union Square Media Group has an exclusive, ready-to-run auto insurance offer for you with a proven track record of conversions.

Otto Insurance is a premier auto insurance lead generation company that connects customers to top providers in their area.

Whether you’re experienced in this vertical or proficient in native and/or Facebook traffic, this offer is for you. It was made for affiliates by affiliates – Union Square Media makes continuous page optimizations to ensure it’s consistent and easy to use. Plus, offers run directly to the site, with no extra redirects.

What does this mean for you? It means you’ll be working with one of the top auto insurance comparison services, which translates to more revenue for you, if you play it right! Union Square Media’s affiliates earn on every valid lead, with no caps – the sky’s the limit!

Ready to get started with Otto? Sign up through this link!

Is Social Media success all about borrowing?

OK, no we don’t mean stealing like that meme suggests, but we got your attention, right?

Organic growth isn’t easy but we are pretty sure that after reading this thread shared by Toby Howell, it will look a bit easier.

Make this info yours, because despite it being about Twitter, you can certainly apply the tips on every other social network.

Those points come with some great practical examples Toby shared, so if social media is your thing, check out the full thread.

What is in the middle of India?

If you want a high-tech pet, get Spot!

Who or what is Spot? It’s Boston Dynamics’ famous quadruped robot. You’ve probably seen it climb stairs, open doors and hike on some rather rough terrain.

Let’s say you are actually working on something which Spot could help with. Or maybe you just have nothing better to do with your money, we don’t judge… What do you get once it’s delivered?

Obviously you get the robot. Then you get two batteries, a charger, a table controller, a robot case, a power case and Python client packages for its APIs.

We’re not techie enough (nor do we have the budget to spare) to do anything about it… but if you adopt a Spot, send us a video!