Landing more of those emails in your customers Inbox 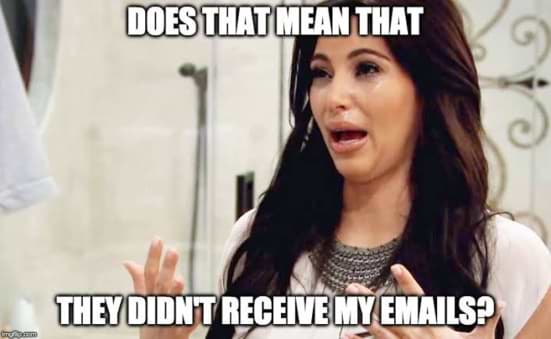 Remember Joshua’s post from last week that we shared? The one where he made $4k from a single email?

Well, now he’s talking again. This time he goes into more detail about how to improve your open rate, click-through rate and bounce rate by mastering these four golden rules:

Avoid spammy subject lines: If you’ve been managing email campaigns for a while, you’ll know that certain words can trigger the spam filter. If not, Klaviyo has a list of such words to make it easier for you.

Because image-heavy emails trigger spam filters, so having at least 500 text characters helps you avoid those pesky filters.

Links in your emails: You might think that more links in your emails results in more clicks, but unfortunately that’s not true. Instead, you should focus s on your content strategy by sending relevant content to your target audience.

How can you do this? By segmenting your lists. Also, you might want to remove any social profile links in the footer of your emails.

Personalization: The more personalized your emails are, the more important they will seem to the recipient. Use tags so that the recipient’s first name appears in the subject line or the body itself. You can also tell your subscribers to add you to their address books for ease.

All this lowers the risk of being tagged as spam and helps the email service providers see that you actually know the person you’re emailing.

Basically, all the same stuff The Crew uses, only our processes are much more detailed and intricate than this. No, we are not being cocky. You never know, maybe we’ll share our own processes in detail in the coming days 😉

Facebook advertisers could get an easy life with Google Ads

In the last few weeks we’ve seen a big trend emerging, with Facebook purging ad accounts for no obvious reason. This post, shared by Vincent Beima, comes in response to this negative period that FB marketers are enduring.

The catch is: This is the best time for Facebook advertisers to jump into Google Ads.

The reason for this lies in one element: Creatives.

The biggest development in the online advertisement world in recent times has been the rise of A.I. and Machine Learning. Bidding and targeting will be almost completely automated in the future.

However, machines are still terrible at coming up with great creatives.

As Facebook marketers, having good creatives is probably what sets you apart from the rest. And, it just so happens that the biggest weakness of Google advertisers is poor quality creatives.

According to Vincent Beima, Google Ads will optimize their ads to be as relevant as possible to the keyword they’re bidding on, but not to the audience segment.

To make this more understandable, we suggest having a look at the example provided in the post.

The Google vs Facebook topic has always been a great discussion. However, if you’re thinking of joining Google just because of the bans, remember that even Google bans accounts if you don’t respect the terms.

In the end, these platforms must tutelate themselves and their users if they are to continue providing high quality traffic.

Do you want a ticket to your favourite marketing conference?

But first of all, what is your favourite marketing conference?

There are a few around the corner: October 22nd and 23rd is the time for PI LIVE in London, while December takes us to Bangkok for Affiliate World Asia. Then, Las Vegas hosts the Affiliate Summit West on January 27th and 28th.

These conferences are always a great chance to create new m0ney-making relationships, get your ear on the pulse of the industry, and meet your partners and marketing friends in person. The human touch will always beat a Skype call.

Why are we telling you this? Because The Crew wants to help you level up your networking game. You know, our saying is “The opposite of networking is not-working”.

How can we help?

That’s easy: Providing you the tickets to your favourite conferences.

Yes! You can get a completely free ticket, and spend all that extra cash on testing campaigns (or maybe on cocktails at the side parties). What a nice treat, huh?

How can you get this free ticket from The Crew?

Well, it’s a fair deal: We help you grow your business relationships. In exchange, you can help us by talking to your friends about this daily marketing briefing.

We think that if you’re here, it’s because you find this read helpful. So, why not share it with other people?

If you’ll help us reach enough eyes, we can get you the ticket to your favourite conference!

And we’ll also get you a cocktail if we meet you there!

When Google and Moz went on a date

So, this happened just before the weekend.

Dr. Pete Meyers from Moz announced on Twitter that Moz has rebuilt its rank tracking software, and guess what?

Your favourite John Mueller from Google replied “How do you pull the rankings?”

For the uninitiated, Google is the very same company that gives either extremely vague explanations or no explanations whatsoever on how they themselves pull the rankings. And it’s a pretty big company when it comes to Search…. *excuse the sarcasm*

Things got pretty awkward after that.

Dr Pete replied to Mueller, using Google’s very own language to do so: “Let me put it this way — the new tool represents no change in how we gather ranking data.”

It’s obvious that Google has its robots.txt implementation which blocks crawling and Moz does not respect that.

The Twitter thread was super funny, but since then some of the tweets have been deleted and are no longer available.

As Seroundtable puts it: “We doubt Google will do anything at this point to stop Moz or other tools from doing this. They have done things in the past but Google generally turns the other way with these things.”

We mentioned earlier that the media buying part of advertising is becoming easier and easier due to the implementation of Machine Learning.

This latest update in the Business Manager reinforces that theory.

When you use manual bidding, Facebook will now tell you the expected amount of budget that will be spent according to your bid.

So, you will know if you’ll get enough traffic according to the bid even before running the camp!

The image below, shared by Savanna Sanchez, will give you a clear idea of the update:

Ready for your air-taxi ride?

What if your Uber shows up with a Lambo? That would be a crazy ride, uh?

What about a helicopter? That’s a hell of a ride!

Fact is, Uber Copter is now available to everybody!

For those who don’t know, Uber Copter is a service by Uber launched earlier this year that provide helicopter rides from Manhattan to JFK Airport. At first, the service was only available to a restricted number of users.

But now, Uber rolled out the update to all Uber users. So everybody can get a helicopter ride to the airport. That’s awesome!

There is a negative aspect though: Don’t expect the helicopter to show up at your apartment and jump to it from the window. Psss!

Yeah, that’s a disservice… However you can book rides starting from a helipad in lower Manhattan.

The Uber Copter venture does have a broader goal though. It’s not just about providing helicopter rides to the wolves of Wall Street. In fact, Uber is aiming to gather data for its plans to launch a fully fledged air taxi business in 2023 using lightweight, electric aircraft.

Maybe those aircraft will actually show up outside the window of your apartment in a Futurama style.

You should open the door with the lions. They haven’t eaten in years, remember? They’ll be long dead.