The online advertising industry is ever-changing. However, over the last few years, there’s one trend that has stayed constant: Growth! 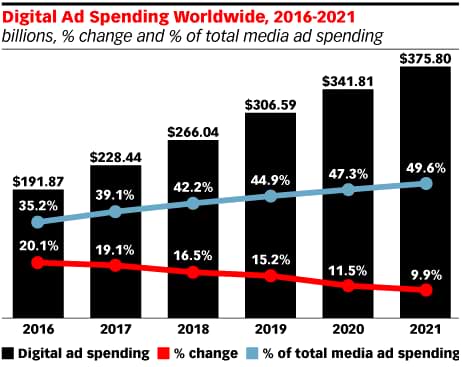 Worldwide digital ad spending is expected to reach over $375B by 2021. What about some other trends for the coming year, though? Well, that’s what we have right here with this post from Business2Community.

Let’s have a look.

Native advertising was the fastest-growing advertising segment, with 35 percent growth between 2017 and 2018.

Keep in mind that, here, native advertising is referring to something a bit different from what we’re used to. So, it’s not only Taboola, Outbrain, MGID, etc. Rather, the survey refers to native advertising as the ads that emulate the look and feel of the media format in which they appear. So, FB Newsfeed ads, IG Stories Ads, Sponsored Pins, recommended widgets (such as Outbrain), etc.

A whole bunch of interesting trends right there. You probably already knew about some of them at least, but these insights now confirm it.

“Test as many ad creatives as possible.” – That’s something we all like to do for various reasons, right? Maybe to see which creatives resonate with different audiences, or to avoid ad fatigue and keep our ads fresh.

However, starting mid-2020, FB is planning to limit the number of ads a Page can run at the same time.

“We’re implementing ad limits because very high ad volume can hinder an advertiser’s performance. With too many ads running at the same time, fewer ads exit the learning phase and more budget it spent before the delivery system can optimize and ad’s performance.”

To help you prepare for this change, FB will be releasing a new version of its Marketing API, including an Ad Volume API to show you the volume of ads running or under review in your ad accounts.

In the near future, this API will also include information on the number of ads each Page is permitted to use.

As per FB, this will impact only a small set of advertisers. However, more information on that won’t be available until early next year, ready for the change to come into effect in mid-2020.

How many of you out there are leveraging Pinterest? Well, we hope you didn’t double down and buy some Pinterest shares too! Why? Because, after releasing their 2019 Q3 report on Friday, Pinterest stock price plunged 21%.

How come? Simple: They didn’t meet the forecasts.

However, despite Pinterest not meeting the forecasts, the stats still look fairly promising:

So, what’s not so good for investors might be fine for us advertisers. The user base is growing, especially outside the USA, making the network less America-focused than it was in the early beginnings.

In the meantime, Pinterest released a new pin format for users that is more visual and personalized.

Now we want to ask this: Anyone out there managing to turn Pinterest clicks into Benjis?

There is an ancient invention that is still used today in some parts of the world, allowing people to see through walls. What is it?

Yup, you heard that right!

This trip, covering 11 cities, 7 countries & 5 continents around the world was booked under the guise of a round-trip flight from New York to Melbourne. Masterstroke, right?

All first-class flights that would take him from Singapore to Australia, Asia, Europe, North America, Africa, and back home. In an Emirates suite, 30k feet up in the sky.

How was he able to do that? Well, a crazy air-miles redemption that had never been done before.

And it wasn’t going to be easy. In fact, it is a bit complicated and tricky, but the fact that he was able to think through the whole process and actually pull it off stupenta-fantabulous.

Interested in the whole case study and want some inspiration ahead of the holiday season? Check out his loophole milking strategy here.