Chrome 80 will hammer down push notifications 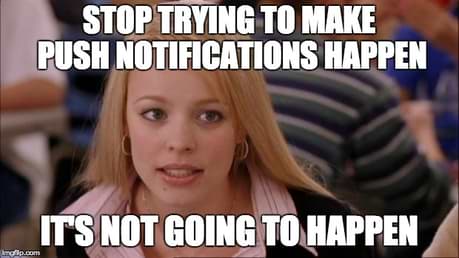 First of all, what’s Chrome 80? It’s a new version of Chrome that is due for release on February 4.

The tool that will do this work is called Quiet UI, and depending on the scenario it can work in three different ways:

So, what can you do to avoid it? Google suggests web developers test their site’s permission request flow with the quieter notification permission UI using Canary. For more info, you can refer to this video as well.

Okay, okay, okay. Push traffic is not going anywhere. As the article says, Google considers push notifications to be a valuable service, so it’s surely not planning to cut it down completely.

However, this update will definitely hit marketers building push lists and traffic networks. It’s less of a hassle for marketers that are merely buying traffic from said networks, although it could bump up CPCs.

Remember the start of last decade? Facebook was ‘just’ a website and a young Mark Zuckerberg was hustling to try and grow it. 10 years down the line and we find Mr Zuck sharing his “Next decade expectations” while the world hangs on to his every word.

Let’s see what our fellow CEO spoke about in his last “Next decade plans and visions” post.

Generational change: Mark aimed at making Facebook empower our generation, giving a voice to different groups in society. He said this hasn’t completely happened, and for the next decade they will focus on delivering a platform for younger entrepreneurs, scientists, and leaders to enable the changes our generation needs.

“For the next decade, some of the most important social infrastructures will help us reconstruct all kinds of smaller communities to give us that sense of intimacy again.”

Decentralizing: This couldn’t be more true! As Mark said, Facebook has given all people the chance to build businesses. He expects that this will continue in the next 10 years, with technology creating yet more opportunities for people to succeed.

“Over the next decade, we hope to build the commerce and payments tools so that every small business has easy access to the same technology that previously only big companies have had.” Excited?

Next computing platform: This is about Facebook’s commitment into AR and VR. The CEO sees a future where these technologies will finally be perfected, giving us the chance to better connect. Or, in his own words “feeling that you’re right there with another person or in another place.”

New forms of governance: Here, Mark Zuckerberg called on govts to take part in regulating the large digital communities the internet has enabled.

It’s a long read and we tried to give the juice here. Mark gave us an idea of what we can expect in the future: Implemented VR and AR tools, more e-commerce features, a focus on private channels such as groups and messaging apps and, finally, more open and improved dialogue with institutions.

🧩 What happens when you find the missing puzzle piece of your media buying venture? You won’t believe the answer…

Nothing But Natives: You will get 3 days of training, 30 days of support and the replays are just for you! This event will not sell replays separately, only attendees get them!

For everyone who’s on the fence, we wanted to let you know that you can sign up for the class most relevant to your level!

Yes, Nothing But Natives takes you from newbie level to advanced, but if you only need a certain part, go get it!

Do you want just an intro to natives, their history, tracking and how it compares to FB? You can get it.

Do you want just the basics that explain whitelists, creatives, bids, budgets and audiences? You can get it.

Do you want just the advanced part where you dig into how to tailor presells, how to use LP CTR as an early indicator, how to run Yahoo! Gemini and push notification ads? You can get it.

Sure, the full package is better for the average media buyer. But if you think you’re missing one specific puzzle piece, whether that’s the intro, the fundamentals or how to master presell and how to expand to Yahoo! Gemini and push traffic with your native campaigns, Nothing But Natives answers your needs. Simple as that!

So go choose which part of Nothing But Natives is best for you!

PS: There are a few bonuses like GeekOut LA and 1-on-1 consultations with the instructors as a bonus if you buy the full package.

Christiaan Vermeulen from the Facebook Ad Buyers group shared a case study about how he took his ecomm store in the fashion niche to $416k at a 6.5x ROAS in just 60 days.

Most e-commerce sites in the fashion niche launch an entire collection at the same time and start running campaigns focused on the “New collection launch”.

Christiaan did it differently though, instead splitting the collection into smaller batches and launching them over the course of a few weeks. Also, to deal with items not getting sold or selling at a slower pace, this split launch allowed him to introduce “Flash Sales”, which generated over $200k in sales in a single week at a 20x ROAS.

Now, let’s talk about the FB campaigns he used to launch these new collections and run flash-sales.

Rather than promoting the entire collection in one go, he built anticipation for new item launches and flash sales by notifying everyone in the warm and cold audiences.

Creatives used were a mix of video views, engagement and conversion ads depending on whether it was a new product or a flash-sale.

This allowed him to build larger warm audiences to target and ultimately helped him generate $100k in a one day sale and $25k a day for new product launches.

A tip that helped him drive down the CPMs is to post multiple times a day. Users on Facebook and Instagram engage with good content, which feeds the warm audiences into your funnel. This is not new, huh?

Creative Testing: Considering how important creatives are for the success of any FB campaign, a lot of images and videos were tested every two weeks for different stages of the funnel.

The dynamic creative testing system he used was as follows:

In the dynamic creative, he put the following:

Well, this is just the tip of the iceberg. In his long post, he goes on to talk about his CBO structure and retargeting strategy, plus a load more details.

Railroad Crossing, look out for the cars. Can you spell that, without any R’s?

There are campaign launches, product launches, offers and angles creation… and then there are next-level scenes.

Like proposing to your girlfriend in a way one can hardly fathom.

Our guy Lee Loechler came up with an idea to hack the animations in his GF’s favourite movie Sleeping Beauty. 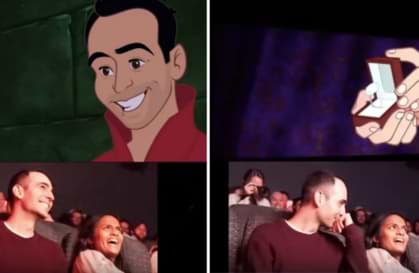 He spent half a year altering the animations of the most iconic scenes from the movie, changing the characters to look like the couple themselves and altering the storyline to set up his Big Question.

Very clearly, Lee boy has set the bar ridiculously high. Even the most cynical among us have to give him props for his creativity. We think he’d make an excellent marketer based on this!

Christmas has just passed and the Valentine spirit is already in the air.

HEEEEY! Are you setting up your store and camps accordingly?