By now, most of you will be aware of the deadly new coronavirus outbreak in China, which has triggered a global contagion and put the fear into economies worldwide.

A lot of cities in China are shutting down public transport, which means a lot of workers won’t be able to make it to their work. China’s economy will undoubtedly be affected by this containment move.

Not only that, but in view of recent events they have restricted travel and extended the Lunar New Year holiday to try and limit the spread of the coronavirus.

Hence, as an e-commerce owner (especially if you are working with suppliers from South East Asia) you should expect some major delays in shipments even after the Chinese New Year holidays are over.

As shared by Francois Jaffres in Ecom Empires Group, even if your suppliers are getting back to work, their upstream raw material suppliers might not be able to provide them with the materials needed for the production.

This means your suppliers might not be able to reach their suppliers. So, if they have not been responding to you, they’re either closed themselves or they don’t have an answer for you.

Keep a close eye on this as it might affect your supply chain, even if your primary supplier isn’t in the majorly affected areas.

How many of you are aware of Crawl Budget and how it can impact sites with a lot of pages?

Crawl Budget basically refers to the number of pages Googlebot can crawl and index for a website within a given timeframe.

Why does it matter? Well, if Google isn’t indexing some of your pages, they won’t rank in SERPs. So, if the number of pages exceeds your site’s crawl budget, you’re going to have pages on your site that aren’t indexed.

A few scenarios where this could possibly occur are:

Other factors that affect the crawl budget include:

What can you do to avoid it?

+ Simplify Site Structure: Use a layer-by-layer site structure, starting with the homepage, categories/tags and finally, the content pages. Use internal linking to guide crawlers.

+ Avoid Orphan Pages: As they have no direct connection to the web, with no internal or external links, Google has a tough time finding them.

+ Remove Redirect Chains: Redirects with more than three hops are a problem for Googlebot. Use a log analyzer to find redirects and simplify them by pointing the first URL to the last one in the chain.

Well, for most sites, crawl budgets might not be a problem. However, if your sites experience any of the aforementioned scenarios, give this detailed post a good read.

🎁 Media500 is giving away iPhones, Macbooks, MAC tickets and magic… MagicAdz that is! Here’s what you need to do. 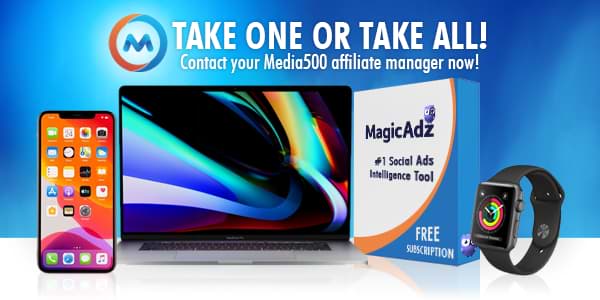 OK, now that you have an account, we can talk about all the goodies they are giving away to their affiliates.

First on the list of prizes are MagicAdz subscriptions. Yeah, that MagicAdz that unveils what Facebook campaigns real affiliates run like no other tool out there.

Next, something for the gadget enthusiasts out there. Want the newest iPhone? A super powerful Macbook? Or you’re more of an Apple Watch guy or gal? Get in touch with your Media500 affiliate manager and ask them how many FTDs you have to send in February to get it.

Are you someone who is more into networking and parties? Then let Media500 hook you up with Moscow Affiliate Conference tickets. Join their squad with some fah-ree tickets and invitations to crazy side-events and parties that will take place in the white nights of Moscow in April 21-22, 2020. Just ask your affiliate manager for the details.

Will you just collect all prizes? Then hurry up and sign up to some of the best financial lead-gen offers affiliates can run this year.

They will have even crazier promos later in the year. Have you seen their Mini Cooper giveaway at Affiliate World Asia?

How to keep your CPAs in check while scaling: Consolidate

This case study shared by Monika Apostolidisz, a media buyer at Dim Niko’s agency, starts halfway through her campaign. Basically, she was scaling a video ad and spending $200k, but when the CPA increased to $40 she had to do something to recover.

And here’s where things start.

The video had already been squeezed, so it was time to test new creatives, all while increasing the budget and lowering CPA in order to keep scaling. Here’s how Monika proceeded.

Started another a TOF campaign: Only one ad set with $500 daily budget. The target was all relevant Interests, Interests Expansion and 10% Purchase LLA. As Monika said, it’s better to have a huge audience consolidated into one ad set, giving more room for the pixel to find the cheapest relevant conversions.

Ad level: Eight new videos and images, but with proven copies and headlines.

After 2 days, the CPA went down to $22, so they launched a new TOF campaign.

4 ad sets: One with the previous campaign’s targeting, one hitting only Interests, one for LLA and another ad set with a broad audience.

After another five days, the two new TOF camps outperformed the old ones. So, they turned the old ones off and raised the budget on the new camps.

MOF and BOF camps were doing well though. So, she once again consolidated the targeting here by using a more simplified structure.

MOF: Just three ad sets, with each one targeting Facebook Page engagers, Instagram Page engagers and Video Views. After three days this campaign outperformed the old one, with CPA going from $25 down to $19.

The juice of this post is: If your performance drops, try to consolidate the targeting into a single ad set. This will give more room for the algorithm to optimize. Then, find those cheaper conversions.

In London, many Underground tube stations have two escalators going up, but just one going down. Why?

There are some issues that every one of us humans can have. And sometimes, more money just ain’t gonna cut it.

His phone was hacked and some people got hold of his private messages and pictures, including some nudz that he allegedly sent to his girlfriend Lauren Sanchez. 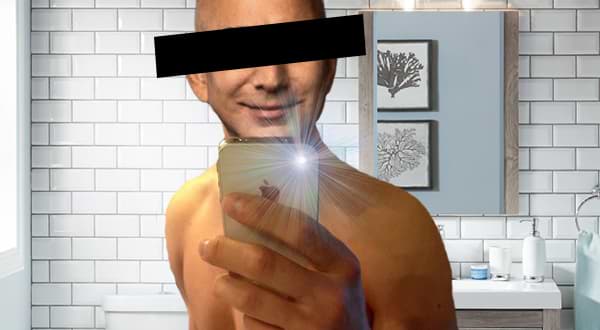 The pics were leaked when she sent these images to her brother.

Eventually, the pics ended up in the hands of the National Enquirer, and they attempted to blackmail Mr Bezos… But this guy has some very thick skin!

You can see that from this Medium post he wrote. Basically, he shared the very material that the publication used to threaten him.