Are you really selling these days if you aren’t using Google Shopping Ads? OK, maybe you are, but you really could be doing more. This is exactly what Sandeep Kumar showed us in the eCommerce Elites Mastermind group.

Sandeep started a new brand on Google Shopping Ads, and the results have been impressive to say the least. He’s been running these kinds of ads for other stores too, so he has built up an extensive array of tips to share with everyone who’s considering jumping on this platform for their stores.

If you want to ask Sandeep more details, jump into the conversation right here.

Should advertisers be allowed to bid on any brand keywords?

Are you active in the Twitterverse? Discussions centered around search ads, and Google in particular, are a regular feature there, and it’s been no different in the past couple of days.

The topic of the day? Jason Fried, from Basecamp, tweeting that they have to run paid ads for the term “basecamp” because Google puts 4 ads in front of their organic result.

This sparked a significant amount of criticism aimed towards Google, because their answer to the debacle was:

The ad by Basecamp? Hilarious.

Twitter-wide outrage about keywords? Maybe an overreaction… Hear us out.

Google’s reply is just too generic and doesn’t focus on the specific situation at all. Not only that, but it’s also sorta disingenuous… After all, we can’t bid on keywords like “Google” can we?

We still think the outrage might be a bit unjustified in some situations, and this applies to Basecamp too.

The term “basecamp” is pretty generic, and not everyone searching that term will be interested in their tool. What about the mountaineers looking for Everest expeditions, for example?

So, it’s easy to restrict bids on brand terms like Google, Microsoft and Facebook, but it gets into more of a grey area with brands such as Basecamp, Amazon, Tesla and others that can also have meaning outside of their brand.

The solution? Better communication and clearer terms. It’s certainly not clear what the rules of the game are, and it’s not a level playing field at all.

🎂 This is The Ultimate CBO Cookbook and it’s a must-read for any Facebook marketer!

Facebook is making Campaign Budget Optimization, aka CBO, the only budget option soon. It might already be the case for some of your ad accounts. Does it work well? Maybe. Can it work better? For sure!

Especially when you have someone like Depesh Mandalia diving deep into the CBO strategies he uses first-hand with 7-figures in ad spend to create and perfect the best recipes.

Who is Depesh, you ask? He’s generated over $100M rev in e-comm, lead gen and mobile apps. He’s spent over $30M on Facebook since 2014, profitably. He and his group are regularly featured in our emails because of how good the content in there is… So, back to the book…

This cookbook is not about fish and chips… Instead, you will be able to cook up some spicy Facebook campaigns. In 75+ pages, Depesh goes into deep insights and step-by-step CBO recipes you can apply to campaigns right away.

This book is the equivalent of spending days if not weeks picking Depesh’s brain so you understand everything he’s learned about CBO from running campaigns first-hand.

As a WHAT THE AFF reader, we know you like to be the most up to date and the smartest marketer in the room. So we’ve asked Depesh to do us a favour… and he did.

Grab The Ultimate CBO Cookbook for 25% off right here, only for WHAT THE AFF readers.

It’s “back 2 school” season for the kids but we say it’s “back 2 work” for marketers. It’s time to get ready for the holiday season, higher CPMs, more competition but also for hungry shoppers!

So hey, even if you’re just curious about the exact table of contents for this Cookbook, head over here. It’s all revealed!

The latest FB data leak could give you inspiration for starting a traffic network. Then, a case study using ads and bots to gather 114 leads for a high ticket service.

It’s been at least a week since the last FB data leak. We were really starting to miss these stories. “Fortunately”, privacy failure and Facebook is a couple that will never get divorced.

Each record contained a user’s unique Facebook ID and the phone number listed on the account. A user’s Facebook ID is typically a long, unique and public number associated with their account, which can be easily used to discern an account’s username.

We know what you’re thinking: You have been paying FB Ads to generate leads, and all this time there’s been a DB containing the phone numbers of 419M users!

That would have been enough to build an SMS traffic network!

Obviously this information has now been taken offline, so it’s not possible to access it anymore. However, we wonder if other people found it before the security researcher did, and what exactly these people might have done with the info…

We’re also wondering if there are any more accessible FB databases lying in the dark corners of the internet. Finding all that data would be 2019’s version of striking oil!

Data leaks aside, let’s check out this strategy that Cameron Marlon Susman shared. It’s the funnel he used to acquire 114 leads for a dog trainer who charges $3.3k for her service. So, we can definitely say it’s a high ticket business.

Let’s jump to it.

Top of the funnel (TOF): Video views campaigns to generate an audience and create Lookalikes from that. They spent $395.47 and generated 5,927 targeted ThruPlay.

We know, the middle of the funnel part is missing, but not every funnel is equal ¯\_(ツ)_/¯

TOF: A 1:54 mins compilation video showing footage of the trainer at work, interacting with and training dogs.

“The dogs in the video were very happy and behaved nicely – planting the seed in our audiences mind of what their dog can turn into as well over time.”

The text in the video aimed to hit prospects’ pain points and desires.

No text was used in the second and third video. The second one was the best performing with a $5.18 CPL.

TOF: Here they used just one variation, structured like this:

BOF: For the bottom of the funnel ads, Cameron tested 2 variations.

The first is the one used at TOF. The second one is structured like this:

Up until now, it’s all been about how Cameron gathered the leads. This part is about qualifying them.

So, apart from some generic qualifying questions, the lead was gifted a free PDF and a consultation in order to continue the conversation.

You can head to the post to read all the questions used in the bot. You’ll also find the copy used in the ads.

Third-party tracking cookies blocked for 100% of users in Firefox

The quick brown fox jumps over the lazy… Chrome?

In a jab at Chrome, Google and the ad industry, Firefox will start blocking third-party tracking cookies by default in its browser.

The “Enhanced Tracking Protection” feature has been around since June 2019 and was utilized by around 20% of Firefox users. Starting now, it will be enabled by default for 100% of users.

Soooo… should you care? Well, a little.

It does mean you might have more issues seeing conversions tracked in your FB and Google campaigns from Firefox users. It also means FB and Google have less data on them.

Why shouldn’t you care more?

Because less data doesn’t mean “no data”. Firefox only has a 9% market share on desktop, dropping to 4.4% overall when you include mobile. Basically, it’s not a significant player, and as a result this will have very little real world impact.

We’re going to give you a few hints:

It used to be the capital of a big empire.

It’s where WTAFF started. (We weren’t talking about this empire first *cough cough*)

And it’s where you can go for free if you refer 1,000 readers to WHAT THE AFF. 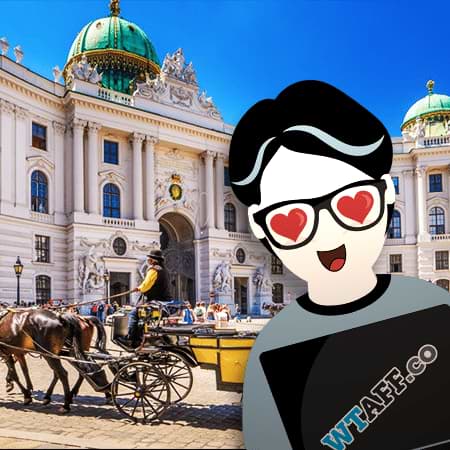 That is according to the Economist Intelligence Unit’s global liveability index. Which other cities made this prestigious list? Well, Melbourne and Sydney took spots 2 and 3 respectively, Osaka came in at 4th and Calgary rounded out the top 5.

What can we say? Vienna is an awesome city, no doubt.

If you haven’t visited before, how about an all expenses paid-by-WTAFF trip?